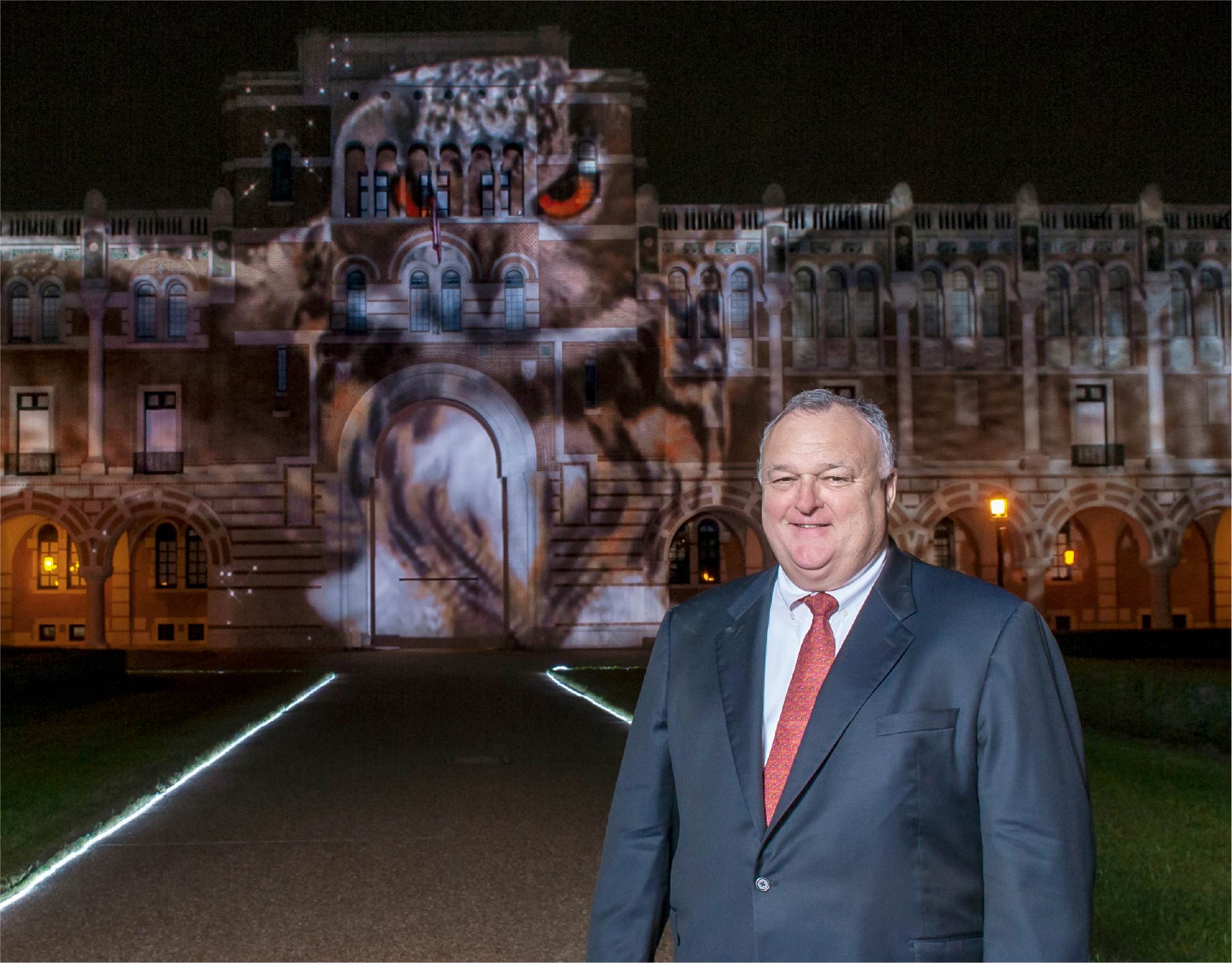 View a timeline of Bucky’s remarkable service to Rice.

It would not be an exaggeration to say that Bucky Allshouse ’71 is a Rice institution. An outstanding defensive back for Rice football, a 1990 Rice Athletic Hall of Fame inductee, an inveterate volunteer — Allshouse is also the university’s last lifetime trustee. When he stepped down this past July, he had been on the board for a remarkable 33 years.

Allshouse chose Rice in 1967, establishing a relationship with an institution and community that would define a large part of his life. As a senior at Randolph High School in San Antonio, Bucky was a popular recruit. He and his teammate, quarterback Terry Lee English, made an agreement to visit a number of schools and then decide together on their collegiate destination. They had been to Texas Tech, SMU, A&M and Baylor before visiting Rice. As they walked out of their visit early on a Sunday morning, Bo Hagan, the head football coach, stopped the boys and asked them what they thought. Allshouse immediately answered, “I want to come here.” English looked confused. Allshouse said, “My decision is made. I’m going to come here.” He had met a number of players, faculty and staff, and he felt at home. “They were very nice people, very warm, very welcoming,” Allshouse explained. “I thought it was the right place, and turned out it was.”

After graduating in 1971, Allshouse spent a few weeks at the Houston Oiler’s training camp and then returned to Houston, still thinking about football. However, Phil Peden ’38, a former Rice cheerleader and appellate judge, took him to lunch and told him he should go to law school. Allshouse agreed and enrolled at night school at South Texas College of Law. In his first year of law school, Allshouse taught elementary school, but for the next three years he worked as the academic advisor to athletes at Rice — a position also known as the “brain coach.” “It was interesting,” Bucky shared. “The first year after I graduated, I could feel myself drifting away from the university. But those three years drew me back in. I worked with the president, Norman Hackerman, and I got to know a number of the individual faculty members as I visited with them about the athletes.”

In the following years, Allshouse was president of the Owl Club and the R Association. He was also involved in fundraising, and his enthusiasm and dedication turned into interesting opportunities across campus. Allshouse tells of a Friends of Fondren Auction held at the Rice Memorial Center when Edgar Lovett ’79, the grandson of Rice’s first president, approached him about a problem. Dr. Red Duke, the celebrity auctioneer, had been held up in an emergency. Allshouse quickly replied, “I’m not an auctioneer.” Lovett paused for a moment and said he would act as auctioneer, but he asked Allshouse to come along to help. Once onstage Lovett apologized to the crowd for Duke’s absence and then announced, “We have a surprise auctioneer — Bucky Allshouse!” And, of course, Allshouse stepped up. He enthusiastically served as the auctioneer for years until former Rice President Malcolm Gillis took over.

By the early 80s, Allshouse was serving on the board of the alumni association. In 1988, Joyce Hardy, the Association of Rice Alumni president, called with a request. “Someone from the board is going to give you a call,” she said. “Just promise me you will say yes.” Not surprisingly, he was asked to be president of the Association of Rice Alumni, and in the same year, Charles Duncan asked if he would serve on the Board of Governors (today’s Board of Trustees).

In 1988, the board had 19 members: seven lifetime trustees who served until age 70, eight term governors and four alumni governors. At that time, only the seven lifetime trustees could legally vote on board matters. They functioned as an executive committee, made decisions on the board and controlled the agenda. Allshouse remembers a collegial board that was open to input from all of the members. “Charles Duncan really did a magnificent job because he made everyone feel like their vote counted,” Allshouse explained. “He always asked for everyone’s opinion and everyone’s vote.

When Bill Barnett became chair in 1996, he recognized that the growth and global reach of the university necessitated a new model of governance. Accordingly, he spearheaded a reorganization of the two-tier structure of the board to a single-tier model that included up to 25 members, each with voting privileges who would serve four year terms. Allshouse and Kent Anderson were carried over as the last two lifetime trustees, and the lifetime tenure was extended to age 72. This summer marked Allshouse’s retirement from the board, a 33-year adventure.

Some people are saying that I must be relieved to leave the board,” Allshouse said. “But I’m really not. Rice is a big part of my life, and it has been a privilege to serve the University.

Over the past 54 years, Allshouse’s impact on the university has been substantial. He has served as president of the Owl Club, the R Association and the Association of Rice Alumni. As co-chair of the Centennial Celebration, he was the mastermind behind “The Spectacle,” the celebrated owl light show in the Academic Quad. He was extensively involved with the Baker Institute for Public Policy and The Shepherd School of Music. He has served on many committees, chaired numerous galas and shared his love for the university with people around the world. In 1995, Bucky was awarded Rice Alumni Association’s Meritorious Service Award — a distinction also bestowed upon his wife Cynthia in 1999. In 2006, Bucky received the Gold Medal Award, the highest honor awarded by the alumni association.

Allshouse’s wife, Cynthia, has also been a vital part of volunteer work at Rice. “She has always been a big supporter of Rice,” Allshouse explained. “And she has been a big supporter of me. She has never complained about me spending too much time flying around the country looking for a football coach or fundraising or whatever. She has always been involved in her own right.” Cynthia chaired the opening of the Baker Institute, as well as the fifth and tenth anniversary galas. She is on the board of The Shepherd School of Music and is involved with the Friends of Fondren. Together, Cynthia and Bucky, along with Dr. G. Walter McReynolds and Linda McReynolds, have co-chaired the Distinguished Owl Club Dinner for the past 20 years, raising money for athletic scholarships.

Even though Allshouse has stepped down from active board duty, he will, without doubt, still be on campus and at Rice events. An emeritus member of the board, he will serve on the Academic Affairs Committee and the Rice University Athletics Committee. He also is co-chairing the 50th anniversary celebration for his class this year.

When asked about encouraging other alumni and friends to volunteer, Allshouse was introspective. “A lot of people would say that you should give back to the university that has given you so much. And that’s always a good reason.” But he was clear that for him — he volunteers for the joy of it. “It is a lot of fun to be around people you have something in common with. We all share a love for the university. I have always enjoyed maintaining a close association with Rice, the students, faculty and staff — everyone from the police department to people taking tickets at the game. I’ve always found Rice to be a family from top to bottom.”