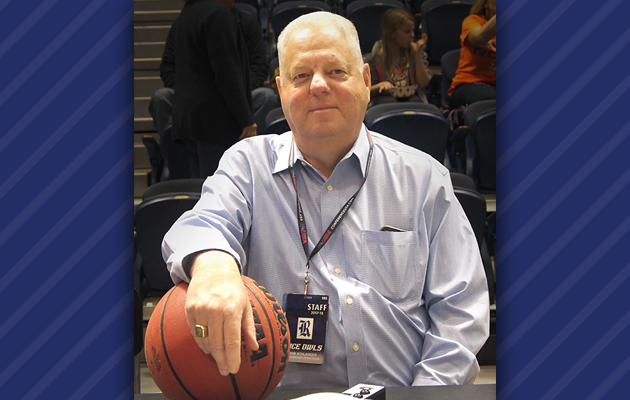 Rarely does a Rice football play occur or a Rice basketball point register without the attention of Rice Athletics volunteer Bob Schlanger ’73, no matter where the game is being played.

A volunteer since the 1980s, the Houston attorney and economics major estimates that he has worked an astounding 3,250 sporting events. He serves as statistician for the Rice football radio broadcast, as shot clock operator for men’s and women’s basketball, as scoreboard operator for soccer and as a volunteer in the press box for the baseball team.

Bob has worked 412 of the 416 Rice football games played since 1981. In his role supporting the radio broadcast, he spends several hours in pre-game preparation, contributes to real-time statistics collection during the radio broadcast throughout the game, and assists with the wrap-up after the game. When you mix in the research he does on each game during the week, you have one of the most knowledgeable and engaged fans in town. “I’m generally pretty familiar with the Rice stats,” he says with a certain understatement.

This level of commitment has inspired an impressive travel itinerary, where he has provided invaluable volunteer support to Rice Athletics. He has traveled to 39 states across the country, working games everywhere from Stanford to Notre Dame to West Point, and innumerable campuses in between. In the span of one weekend, he once traveled to Memphis for a soccer game on a Friday night before hopping over to Orlando for a football game that Saturday, only to catch a late-night flight to Birmingham for another soccer game on Sunday.

In 2017, he traveled to Sydney, Australia, to work at the Rice football game, an experience he describes as “really something special.”

I believe in the mission of Rice, and I think Rice Athletics serve as an important window to the campus.

As a volunteer, Bob prizes the friendships he has formed and the rewards of working with smart, dedicated student-athletes. “Early on, I volunteered as a way to find a diversion from my career during the work week,” he says. “As I continued to be involved, I became familiar with the coaches and administrators, who became friends, and I got to meet the student-athletes. I’ve found these students to be amazing representatives of the best that Rice has to offer. Ultimately, I get a lot more out of it than I put into it.”

Bob encourages others to get involved, first and foremost by simply showing up, and he thinks everyone can benefit from being a volunteer.  The 2007 “Honorary R” holder and 2012 Spirit Award winner often cites a quotation from Gordon B. Hinckley: “One of the great ironies of life is this: He or she who serves almost always benefits more than he or she who is served.”

His fellow volunteer Helen Savitzky says she “greatly admires Bob’s commitment and dedication to the Rice Athletics department,” and they share in the desire that more people will attend Rice Athletics games. “If people knew our students, knew our athletes, they would love to watch them perform,” Bob says.

All in all, his longevity is the result of his passion for his alma mater. “I believe in the mission of Rice,” Bob says, “and I think Rice Athletics serve as an important window to the campus. People who have a relationship with Rice, whether they’re a volunteer, an alum or a student, always have a place for Rice.”

If you are interested in learning how you can get involved as a Rice Athletics volunteer, please visit our volunteer opportunities page.